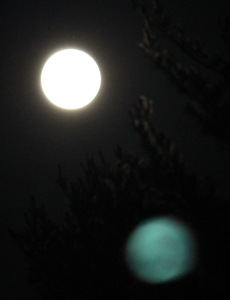 The moon-child forgot who she was before she turned three suns. In her time of  forgetting, she mapped the stars with rocks in the dirt below her feet, and played with the rainbow of light around her growing body. When the birds flew down to watch her, the moon-child hummed their songs deep within her throat. Sometimes she would even sing.

One day, when she was playing with the trees’ broken fingers, drawing spirals in the Earth’s brown body, the moon-child learned about silence. The rays of solar light were too glorious to ignore, and the moon-child rose from her crouch, threw the tree-fingers to the side, and began to dance. Her orange dress caught the waves of the wind as the moon-child wove the golden light around her. She raised her face to the sky and opened the mirrors of her eyes to absorb the endless blue. Laughter bubbled up from her belly and tipped the flap of her throat until it released her air.

The moon-child, too absorbed with the sky, didn’t see the tree-finger next to her dancing feet, and when she twirled, one last time, she stumbled her tender body over the rough limb. Down the moon-child fell, like a tiny comet, rolling into a ball over her bleeding skin.

It was the first time the moon-child saw her body release a red river and she became filled with fear. Her small lips opened in a cry to her Earth-mother. Over and over she cried out her name, until her voice grew faint with frustration. Before she gave up her voice, the moon-child grew angry, and stamped her bare feet on the hard ground until her wounded toe bled a small stream of red into the dirt. “Ouch,” she cried out, remembering her pain.

Once again, the moon-child began calling out for her Earth-mother to help her. She wanted to be held. To be loved. To be told everything was going to be okay. She wanted her Earth-mother to cradle her in her arms and make the hurt disappear along with the red stream leaking from her body. When she again paused to listen for a response, her ears heard only silence. Even the birds had stopped singing.

The moon-child didn’t know that her Earth-mother had chosen to sleep away the day, and heard her cries only as a dream. And so, the moon-child also learned about abandonment.

Days passed into troubled nights, and the moon-child stopped dancing in the golden light of the sun. When she traced shapes in the dirt with tree-fingers, she began to forget their origins. Although the birds still settled nearby to watch, and to sing to her, the moon-child stopped singing back. They are not singing for me, she told herself. They are singing for each other. They do not see me. No one does. Not even my Earth-mother who is always asleep when I need her most.

At night, when her Earth-mother left their cabin and it was her turn to sleep, the moon-child gazed at the white light in the sky that slowly grew from nothing into a large white circle, then back down to nothing, as though it was playing peek-a-boo with her.  Where do you go? she wondered when the body of light disappeared behind the veil of darkness. Take me with you! she whispered into the inky air as she imagined her body sailing through the dark sea on a path of stars to get to back home.