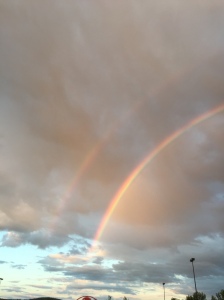 I didn’t know why I felt compelled to bring it, but I had a feeling I would never wear it again. There had been the sense for some time that it was no longer meant for me. Perhaps it never was. For more than a year I had worn it often around my neck, and felt the comfort of its presence against my heart. Last year at the Silent Eye’s annual workshop, The Leaf and Flame, where I played the role of Queen Guinevere, the rainbow crystal wrapped in wire rested against my velvet gown. It gave me the sense of strength and protection as I experienced my first journey with ritual drama.

This year, the crystal stayed tucked into the folds of my bag, until I brought it out when we ventured into the land of the Feathered Seer.  At the Raven’s Nest, where I had felt the longing to re-enchant a land that had been defiled by mankind, I thought about the small pile of stones I had with me from the workshop. Stones now energized with the collective love and light from our group, which would be seeded back into the earth from which they came. These stones have now traveled to places in the states, and have even made their way back to the United Kingdom. They will be planted by people with the loving intent of repairing the Web-of-Light in Earth.

For the next day, after I left the Nest, I thought about the small round obsidian stone I had with me, and berated myself on not leaving it where I had found the remains of a dark offering. Yet, it didn’t feel quite right.

Before we left for Barbrook to visit the final home of the Feathered Seer, I impulsively grabbed the rainbow crystal I had brought with me from the States, and tucked it into my pocket. It stayed there, almost forgotten, until after I had visited the waters that divide the moors into the lands of the living and the lands of the dead. Before we left, I visited the stone circle, and took my turn sitting first toward the outer-world, where the living dwells, and then the inner-world, where the unseen speaks through the veil.

By the time I rose from the Seer’s stone, I knew my answer. Removing the gloves that guarded against the cold from my hands, I dug into my pocket to retrieve the crystal I had brought with me. I had already removed the chain, but wire still wrapped its body. My hands, driving my intent, uncoiled the strands that bound it, until the crystal lay freed upon my palm. I held it up to the light for one last look, and saw the face of a raven in its form. I now knew why I had brought it to England, and why I had not chosen to leave the black obsidian at the Nest. A sense of comfort began to replace the unease that I had felt since my visit to the Nest. I imagined the rainbow light of the crystal nestled into the bracken under the rocks. It’s light coursing through the broken veins of Earth. Re-weaving. Re-enchanting. Bringing hope and love back to the land.

A couple of years ago, I had a dream about the stones of Earth, which are mined for beauty and adornment, as well as for healing intentions. In the dream, I saw a stream of water, not unlike the brook at Barbrook. I had a stone in my hand, and felt the loss of its connection to the land from which it came. The stones need to be returned to the land, I was told by a guide inside of my dream. Many others, including the companions of the Silent Eye School, have been hearing the same message. Do you have a rock or crystal that calls for a return to the land? Have you infused a special stone with your love, which is now ready to spread its light into the body of Earth? I like to imagine the threads spreading like the silk of a spider’s web, deceptively strong and clear, and holding the wavelengths of the full spectrum of the rainbow, as they grow and weave. Threading the Light back until the Web becomes a circle, connecting all life, once again.

10 thoughts on “The Raven Crystal”