Perhaps it is because I live here, but I feel as though the drugging effect of fear is acutely present in the U.S., perhaps more so than the rest of the world at this time. I can see the Lady of Justice holding her scales, and they tip precariously downward. Fear holds a heavy weight. Recall the feather of Truth is weightless. The heart filled with Love holds no gravity. Yet, we are wavering on the brink of awakening to our true selves, so many of us holding onto the numbing effects of fear. I say numbing, because I see fear like a drug. I wonder if Caroline Myss would agree with me?

Recently, I felt called to re-read her book Anatomy of the Spirit, and was struck by her observations about the power of our collective energy. She speaks about the words we use to ourselves, and as a collective nation, and how these words and the energy they carry with them, create our reality. Many of us are familiar with the idea of manifestation and the Law of Attraction. The idea that what we send out, we create.

In her book, Myss uses as an example for this how the Great Depression coincided with the polio epidemic and the election of a crippled president. The Nation was literally crippled by the economic devastation at the same time a crippling disease crippled the health of its people. When the economy turned around, she noted, a vaccine for polio was discovered.

Few would argue that the U.S. is in the midst, or rather mist, of a drug crisis that threatens to spiral out of control. So many of us have elected to “drug” our minds. For many, it seems beyond our person control. We are in the midst of a new election for the leader of our country, and the choices, in some ways could not be more polarizing. When you look at the choices closely, and the rhetoric used, it is almost impossible to ignore that fear plays a heavy hand with many of them. Fear, my friends, is a drug. It numbs the powerful energy of love. True power is not control over another, it is not subjugation, it is the blossoming of the  power within. The knowledge and allowing of the true self, which is governed by Love and Truth, to shine forth. True power does not erect walls, it disassembles them piece by piece, and discovers as it does so that love resides within. And with that love, is unity.

Why do we fear? It’s a puzzling thought on many levels. Is it not our natural state to Love? We fear, quite simply, because we are taught to. False power, and those who strive to have it, perpetuate this fear. They shine fear though the glare of the news and thousands of horrific photos (which feed our fears), they write the word fear in its myriad forms in our newspapers, least you forget who is really governing you (or so they like to think). And so many, I believe, who don’t know what else to do, who are so mired in the muck of this plague of fear, succumb to it. Some choose drugs (more than some), in an attempt to numb the effects perhaps, but the result is loss of self-control. Loss of the true self. Loss of the belief that we are, in essence, Love.

The good news, though, is that the true self can always be recovered. Love is an energy, it cannot be destroyed, only manipulated and morphed into another form, but not forever. Love is the absence of resistance. Love is the absence of fear. Love is the knowing that the person beside us, and the person four thousand miles away, is a mirror of our self. It is up to us to see what we choose to in the mirror. It is up to us, individually, and collectively, to decide to perpetuate the struggle for separation. This false belief of hierarchy and “power.”

If you doubt this. Close your eyes. Dive, or walk gently with however many steps it takes to get there, into your heart.Therein you will find the answer. Therein you will find the Peace, Love and Joy that is you, and the knowing that this essence resides in all life. In each and every one of us, even if it is being temporarily drugged by fear. The choice is yours. The choice is ours. 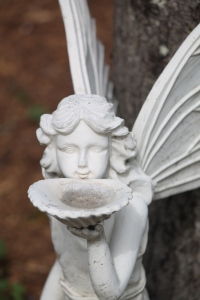