Recall the Bird of Spring who appeared to me on the the 24th of January. I have not forgotten her, nor have I forgotten how she appeared in the days before the 11th. She often watched in silent vigil from the bush filled with winter berries in the neighbor’s front yard, while I waited for Alex to get off the bus. You were usually inside.

There was the flock of robins, Dad said there must have been 20, if not more, outside his office. Did you send them after you came to him in a dream, telling him you were leaving? Of course, I already knew. How could I not? I felt you release the tug on the orange nylon that bound us together months before you finally let go. I knew last summer you were patiently urging me to take the lead, knowing well before I did, that I was ready. That you had, in the heart-beat of 5 and 1/2 years, shown me how to walk the path of love, and to take the lead. The last 6 months were a gradual letting go, your final gift to me in your physical form.

Oh, but you knew I would weep and rage. You knew I would cling fiercely to the memory of  the brown silk of your fur pressed against my lips, and feel of home when I wrapped my arms around your body. You knew, even, that I would miss the tug-of- war, the constant test of who was in charge. 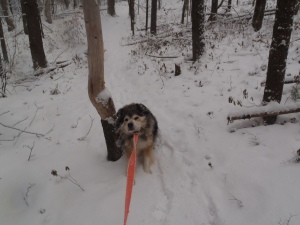 You knew I would hold on, even after I let you go. So you sent me robins and hearts. I saw the love that you wore on your face everywhere, in the days before you left, and even more now that you have crossed the rainbow bridge without me. One thought, and you are back. I see the symbol of your love burned into snow, etched in ice on windows and carved into the life-lines of wood. I saw your love two nights ago, when you sent me the barn owl (with face of a heart) in the cypress tree. I see it each time I remember your face.

Your rebirth into pure spirit, was my letting go. To become my own spring and bloom new. Even though I still shed the waters of sorrow, my garden is ready to birth strength. How many nights, as I was preparing to let you go, did I dream of a home, my home, surrounded by the rebirth of life? I woke happy, filled with hope. Filled with promise.

Even the 3 crows that caught my eye, circling the invisible wheel, made me think of the magic of birth and not death. You were the 3rd, though, in a close trinity of passings. My days and nights were filled with the numbers 3 and 7, even when they appeared with the numbers 10 and 11. The 10th was the day I knew for sure you were leaving, the 11th, when I opened the door to let you go.

On the 8th, two days before I decided it was time, I saw two robins. That evening I fell into dreams of rebirth. I played through the game of life, recording scores, which reduced to the number 9 – the complete cycle for birth. I searched tables of food and ate. I took the driver’s seat and drove, with the top open, over a bridge, where above me a green wheel turned. I watched my child (who looks so much like me) let go and felt only peace as he released his hold. I turned back time and became a young woman again. It was summer, 74 degrees (reduces to 11), and I was among a crowd of peers heading down a hill to swim. At the intersection of paths, I decided to walk alone. I went to the rocky shore, instead of the sandy, sun-filled beach, and stripped bare of my white shorts and flowered blouse, before I lay my body on the pebbles and let the water wash me clean. Here, I felt freedom. I felt release. I shouted back, fearless, to the girls who taunted me, calling them out on who they really were. I swam away from the boys who followed my naked form through the water, and pulled my clothes over my wet body before I walked back up the hill, alone. Later, in another dream, a messenger hugged me and told me it was time to surrender. To let [you] go. So I did.

3 thoughts on “Taking the lead”

Join 2,515 other followers
Follow The Light Behind the Story on WordPress.com