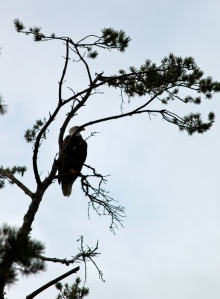 I had been waiting all summer to see the eagle in the cove beside my mother-in-law’s cottage, just as I had been waiting for the waves of upheaval in my life to ebb into a steady state of peace. Three days ago, after a night spent at the lake, I made my way to the edge of the water and peered through its stillness.   It was the perfect time to hunt. To fish, if there were any to be found. The day before I had found the downy cup of an undercoat feather, all white with faint hints of brown forming a V at the vein. I took it as a sign.

I felt the presence of my “East” totem before I saw him, as I climbed along the scrubby bank of sweet fern. In the pine, bending out towards the water’s edge, and silhouetted against the waking sky, he sat silently waiting. He could have been there for hours already, and in the course of that long morning I watched him move only once, to fly across the cove to another pine.

Our primary totems appear to us when they want us to pay attention. To listen.  To see with a vision beyond the magnification of the naked eye, and, with Eagle, to learn to fly as close to the “sun” as we can without being burned.

To accept our totems, we need to embrace their wisdom. Eagle came to me when I was alone, in the stillness of early morning when life only begins to wake and move. He was patient in his vigil, calmly waiting out the hours as he gazed through the clear depths of water for the elusive fish that he never found. The second time he took flight, disappearing beyond my vision to find a new hunting ground, I missed his departure, distracted in my own vigil by my daughter.

Two days later I would crash again into the choppy waves of emotion. Perhaps I should not have left the downy feather I knew was from the eagle – an offering of a fluff to help buffer an energetic attachment that I am working to release as I realize that sometimes we can only heal ourselves and not those we love.